Elon’s revelation that the Twitter deal has been put on hold, for the time being, has shocked the world once again. On Twitter, he referred to a Reuters article about Twitter spam accounts. Twitter’s arrangement has been put on hold “waiting for details supporting the calculation that spam/fake accounts do in fact constitute less than 5% of users.”

Here is what you must know. 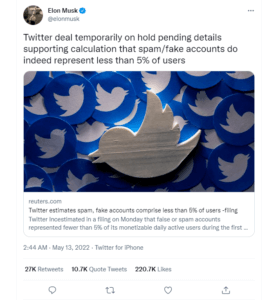 As part of his purchase of Twitter, Musk wants to reduce the number of spam and fraudulent accounts on the platform. For the time being, he has decided to put the Twitter deal on hold until the spam situation is addressed.

If you’re not familiar with the term “spam account,” it is a type of platform manipulation used to boost the performance of a post, but it can also negatively impact the user experience. 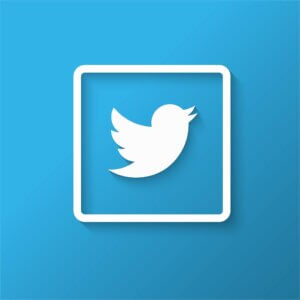 Reuters said on May 2 that “false or spam accounts made up less than 5% of its monetizable daily active users during the first quarter,” which Musk included in his tweet with this claim.

The article cites the bogus account data, which Musk shared on Twitter. The figures provided by Twitter were based on estimates, and the true number may be greater.

In addition to this, Susannah Streeter, an analyst at Hargreaves Lansdown, points out that “This 5% metric has been out for some time.” It is obvious that he would already be aware of it… Therefore, it is possible that lowering the price is part of the overall strategy.

Since 2013, Twitter has reported that the spam quotient is lower than 5 percent. However, the company has stated that this figure is an estimate, and the true value may be higher as well. Elon Musk (born Elon Reeve Musk on June 28, 1971) is a business tycoon, philanthropist, and investor. He is the creator, CEO, and chief engineer of SpaceX; an angel investor; CEO; and product architect of Tesla, Inc.; the founder of The Boring Company; and a co-founder of Neuralink and OpenAI, among many other companies.

As of May 2022, the company had a net worth of approximately $265 billion. In terms of total net worth, both the Bloomberg Billionaires Index and the Forbes real-time billionaires list place Elon Musk at the top of the list.

Elon Musk proposed acquiring Twitter, Inc. for $43 billion on April 14, 2022, after acquiring 9.1 percent of the company’s stock for $2.64 billion and therefore becoming its largest shareholder.

As far as I can tell, he’s serious about the deal.

Let’s check to see whether this is a tactic to cut the price, which is something that has occurred in the past with other companies in response to the challenges of the economy.